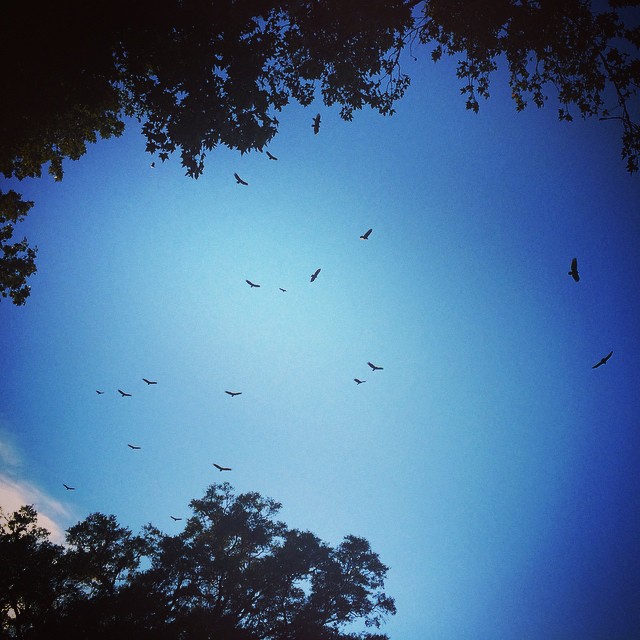 I was sitting in the back of the room with the other yoga nidra facilitators listening with half an ear to the teacher in the front. I can’t even tell you who it was. I don’t remember. In my distracted state, I cut my eyes toward the giant picture windows to my right – I do this often – and between the lush, old stately trees I could see the lake sparkling. A small hole between branches provided the perfect view of a cerulean blue sky and in that tiny hole a vulture soared.

During this 10 day training I have entertained hoards. At one point, I was peacefully rocking myself back and forth on a swing, enjoying the breeze coming off the lake, lost in the lapping of the water against the shore; I leaned forward for some reason and when I looked up dozens of vultures were making their way across the sky above me. They were low enough for me to see the holes in their beaks and hear their wings flap as they gained purchase against the wind.

They kept coming. I was awestruck. I have never seen so many aloft at once.

I stood, as much as a salute to their humility and grace as to close the gap between us by another foot or two. I longed – long – for one to swoop down and sit beside me. They are clearly my animal totem and I simply adore them.

No matter when I looked up, during this ten-day training, they were there.

As I sat in the back of the room watching my friend soar effortlessly, I thought, “What are they trying to tell me?”

The meaning simultaneously accompanied the words, yet I tried to analyze it, figure it out. It was an opportunity, in that moment, to simply say, “ok” and let it all go. But I needed to know more. I needed to figure out what my dead was. Which relationships, beliefs, habits was I supposed to let go of? How should I clean them out, how will I know if I have?

This gift that was handed to me became a light that revealed a pattern that doesn’t always serve me. Planting a thought in my brain then attaching a million other thoughts to it. Trying to figure things out.

Sometimes I just have to say ok. And so I did. Sort of.

I am using this command, ‘clean up your dead’ each time I find myself hooking into a thought pattern that isn’t serving me. I won’t catch them all and it will be a process of recognition and repetition until finally it’s not. But I’m committed.

And if I hold on a little too long to the dead weight, I have plenty of airborne friends around to remind me.