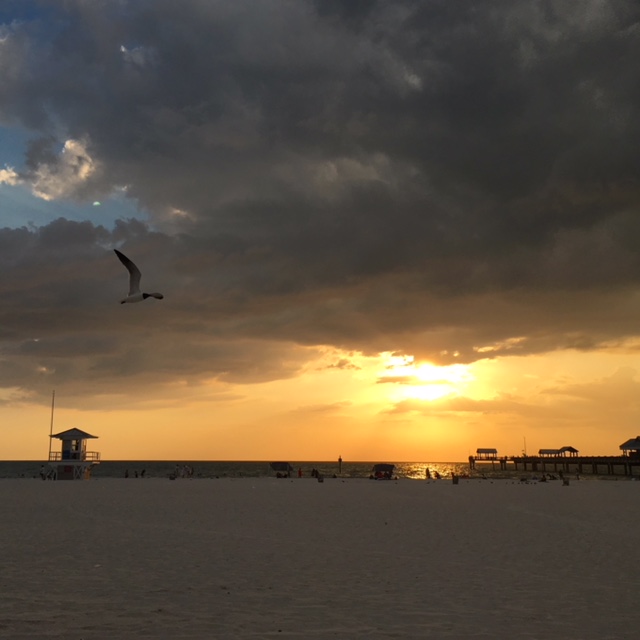 There was a time when I would scoff at the notion of a whole year being bad. I would internally roll my eyes and externally offer Pollyanna platitudes on the unlikelihood that a whole year could be bad. “A year is just time,” I’d say as I would tilt my head just so and bat my eyelashes. “Time is neutral.”

That is true. And time, like everything else, is made good, bad or neutral by our perceptions.

My perception is 2017 is crap. There. I said it. Pollyanna is withering in the corner like a forgotten houseplant. However, with a little water and sunshine, she’ll be back. She’s tenacious. She is simply incubating, hibernating. I feel she has big plans.

To review, you may recall I came out guns blazing for the GIANT PURGE. I started the year counting all my things, tossing bags of things away, taking multiple trunk loads of things to charities and selling some other things. I was disgusted with everything I had accumulated and equally proud of my recent ‘stuff’ enlightenment.

Then a phone call at the end of January shifted everything. My mother was found unconscious in her home and had been transported to a hospital. She had had a massive brain bleed from which she could not and would not recover. Her passing was peaceful, but sudden. Her death likely caused by the medication meant to keep her alive. A known side effect.

Death is a known side effect of life, after all.

While trying to manage my grief – that’s a joke by the way, grief has its own agenda – I was also now tasked with managing her service and her stuff. She was on the edge of hoarding. She did not buy useless trinkets and appliances she would not use, but fabrics, yarn, beads, and crafting supplies she had big plans for. She owned hundreds of books (as do I) and had stacks of magazines that doubled as end tables. Baskets full of crystals, motivational and affirmation cards, CDs and sticky notes everywhere.  Now it was all mine. A two-bedroom apartment two hours away full of her stuff and some family memories. And her life.

Was this a cosmic joke? I decide to purge and now I have an additional whole house to deal with?  It wasn’t so funny. I would learn in the 11 months to follow that the Universe has a very wicked sense of irony. But it’s all for my growth, right?

Instead of releasing all my stuff to create more space, both physical and mental, I was given more. More actual things to go through, more situations to navigate, more challenges.

Be careful what you wish for.

But here’s the thing: there is always beauty and magic. One year can be defining, it can be difficult. One incident in the year cannot define it. The beating down every time I got back up, the ground shifting underneath me as soon as I felt stable – that can define a year. But more importantly it can define me.

Growth is messy and hard. It sucks. Can I just say that? I’m in the business of growth and self-development and it sucks. And it’s necessary. And it’s beautiful.

Here’s the other side:

All in all it was just a year. The waves were higher, the water more turbulent. But stormy skies make way for the best sunsets. I learned more about myself through these challenges and some of it was not pretty. At all. But I believe I did purge. I was able to peel away some of the layers of pretense and armor.

I didn’t often ask for help, mostly space, but everyone I considered a friend offered so much support and love and even those I didn’t know that well became little lights in the darkness through their kindnesses.

It was just a year. It’s all perspective.

As I write this on January 1, 2018, it is raining, cold and windy. That feels somehow appropriate. Cleansing. Preparing for the journey ahead that will be this year.