I follow this badass, super-connected, multi-dimensional being on Instagram. I would say it was totally by accident, but… you know, there are no accidents. Anyway, she does these intense videos – of just her talking – that I am powerless to turn away from.

One of these videos popped up recently and I watched it more than once (it’s not important how many times) because her primary concept kept picking at a loose thread in my subconscious mind and I knew I had to unravel it.

She was talking about the new moon energy and how a lot of death was happening. Metaphorical death, the death of beliefs that were no longer useful, ideas of the ego that no longer held sway over emotions, aspects of the personality that were a waste of time and energy. Old grids on which our beliefs were built are disintegrating to make room for new light and new growth, and this thought came to me: I have to kill my “self.” I have to help the Allison that has been trying to protect and control and guide me away from things that may harm me or just make me sad – for about forty years – and toward false identification with the body and thoughts – deep breath – die.

The ego. I’m talking about having a serious sit down with the part of my personality that thinks it is helping me by steering me away from edges and sharp objects. By protecting me from growth.

This now feels like the only way to move forward untethered to the past. There was a certain clarity that came while she was talking, this vision of peeling back many veils, layers and layers of opinions and dusty old truths, that have been dulling my shine, obscuring – like Vaseline on glass – the power of my true “Self” with a capital S. There is a light that has been covered in the soot and grime of good intentions and procrastination and it’s time for it to shine.

I don’t know what this means yet. I just know that all the things I have been doing this year so far, the action I have been taking, is starving the beast and concocting the perfect elixir to reveal whatever is lying beneath.

I have to let her go, this outdated version of Allison. There are some insidious patterns there that whisper of not being enough, or loveable or some such nonsense. Because we all have this secret shame. And just so you know, it’s bullshit. No one is responsible for loving you, but you. No one else is allowed to tell you if you are enough or not. And just to reiterate, you are enough, you are lovable and I’m pretty sure you’re a secret badass too.

I imagine there will be a bit of psychological warfare involved, the ego is tenacious in holding onto its life. And truly, it is necessary – the ego that is – it just needs to be educated, controlled, handed a lollipop and sent to the corner for a while.

While killing aspects of Allison may seem harsh and possibly not even doable, it feels like a healthy portion needs to be excised nonetheless. Perhaps I can deny it attention, overcome its objections and dismantle its reassurances that its necessary for my very survival. Perhaps.

I’m interested in what’s on the other side, but more than that I think I’m interested in the process. Allowing absolute truth (yet to be revealed, stay tuned) to lift the hems of the veils and carry them away one by one. Dissolving back to wherever it was they once came.

I failed the first day.

I mean, I did take a couple deep breaths, convinced myself I was meditating in the shower and did some forward folds while blowing my hair dry. It’s not exactly the pranayama/meditation/yoga morning practice I envisioned.

Today is different. Today I did it.

Today I sat for five minutes in meditation while silently repeating my mantra which was joined by a million urgent thoughts that really wanted me to open my eyes and write stuff down so I didn’t forget it, but I persevered. Five minutes can be a lifetime with a head full of really pushy broads.

I did 100 rounds of a breath called kappalabhati – or skull shining. It’s an energizing breath and probably my favorite. 2 rounds of 50.

Then I did a super abbreviated yoga practice, like 20 minutes, with one posture of each type: standing, balancing, back bend, forward bend, etc. But, I did it.

Why do we avoid what we know is good for us? Or is that just me? I fight yoga – the shape making part, the philosophy is woven into my every day, but the bending and stretching and ugh – but when I actually get onto my mat and move, I am so grateful for my practice. ‘Oh yeah,’ my body says, ‘this feels really good. I have so much more space and peace now.’

So, it was a slow start, but I started.

In the not so distant past I may have thrown the towel in altogether. ‘I blew it, ‘I’ll just start next month or next year or Monday, yeah, Monday’s always a good day to start.’ Honestly though, any good habit or major health- or life-altering decision I’ve ever made has probably been on a Tuesday or Saturday sometime between breakfast and lunch.

I’m calling it a lazy win. And I will gladly accept my trophy for just showing up. 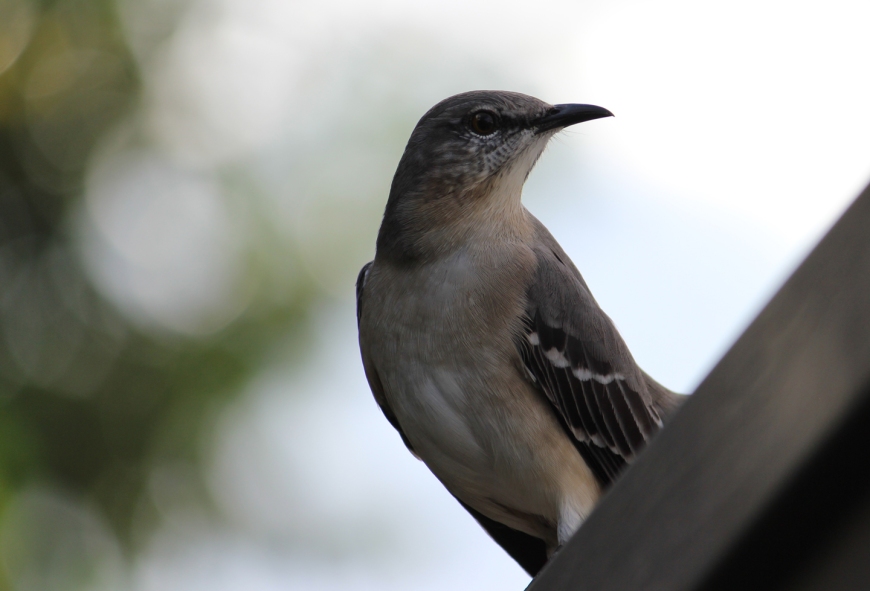 I am a master procrastinator. Not proud, just practical. I don’t know that it’s that I really want to put things off, it’s just that I have so many things I could or should be working on that I shut down. I stare into space, usually my magical backyard, and wait for the priority to float to the top. Often it’s a nap, so I work on that first.

But, yesterday I took a little road trip from Procrastination to Distraction. Having spent the entire morning in Completion I felt no guilt about this. Especially since I was beckoned to move farther along the path of avoidance by the delicate warbling of a feathered friend.

Having accepted his invitation to the concert, I slipped out my back door and stealthily sought him out with my camera. He sat on a lower branch and was so into his own story, beak aloft, eyes closed, that I was able to get right under him to take his photo. Perhaps that was his plan all along.

I watched him for some time, his throat vibrating as he pontificated on the state of the weather and pesticides; lack of worms and suitable mates. On occasion his tone would change, becoming more conversational, understanding, softer. His passion was clear.

In order to reach a broader audience he would hop to the next higher branch, then the next higher tree.  Satisfied he had conveyed his feelings appropriately or dismayed his calls had gone into the ether unheard, he flew away.

I thanked him, hopped back into my mental convertible and headed back to Procrastination. A little sad to leave Distraction, the land of shiny things and birdsong, I lingered for just a moment to see if something else would catch my eye, extending my stay. Not today. My mission complete, I turned the old rag top around glancing back only once  at the sparkling raindrops on the honeysuckle. A mirage, I told myself as I pressed the accelerator in the direction of home.

Today’s writing prompt: Now? Later! prompted me to dust off an older blog, shine it up a bit and repurpose it for this challenge.