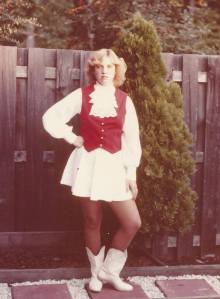 “I think the quality of sexiness comes from within. It is something that is in you or it isn’t and it really doesn’t have much to do with breasts or thighs or the pout of your lips.” – Sophia Loren

I love my thighs.

Ok, that’s a  little bit of a lie. Like my knees, I find them very useful but not appropriate for all audiences. We’ve sparred a lot throughout the years and they’ve never quite measured up to my expectations. Or dreams really, I don’t suppose I expected a whole lot out of them based on the DNA of the female thighs in my family.

They introduced themselves to me sometime in the fourth grade. I was wearing culottes and playing in the front yard with my best friend Maria, when I noticed her legs were way skinnier than mine. Mine were normal, so were hers, of course, but I was at an age where comparisons were how I was making sense of the world. Bigger, smaller, better, worse, prettier, uglier, nicer, meaner. At this time, Tiger Beat magazine started to make an appearance, informing my tastes and educating me on all things cool and correct. This was the same year I took the book “Everything You Always Wanted to Know about Sex, But Were Afraid to Ask” into school to share with my friends at recess. I was exploring, let’s say.

From that point on my thighs were never good enough. They were never normal or pretty. My knees touched, knock-kneed I believe was the term, which made my thighs touch if I stood with my feet together. Other girls had this great space between their thighs and knees that birds could fly through. A piece of paper would struggle to make its way from the front of my thighs to the back. If I ran in corduroys, the fire department would surely be called.

What I didn’t realize at a young age was that the structure of my legs was what it was and there were millions of girls with that same structure. They just didn’t show up in cool magazines, hanging off the arm of an up and coming rock star. Or maybe they did but their legs were crossed or positioned in such a way that their deformity didn’t show.

I continued to put on a brave face and wear normal clothes, even baring some thigh skin on occasion but I always checked the legs of those around me. As I got a little older I busied myself with extra-curricular activities in hopes I would find my thighs a safe home. Drama club, sports, keyettes, homecoming committee. When I was involved in a sport or otherwise occupied I didn’t give them much thought, but when I was lined up with other girls my age for a swim team photo or soccer composite, I always glanced from leg to leg to see if mine were thinner than at least one other person’s.

When I look back at photos of myself now, I see how ridiculous I was, but at the time it was all so true for me. Today my thighs continue to refuse to conform to the photoshopped, super model ideal I have set for them. And they’ve picked up a few bad habits; spider veins, a little extra cushion, skin that’s lost a bit of its elasticity and of course a few well-earned scars. So they remain mostly hidden.

Then I see women, whose thigh circumferences far surpass my own, with cellulite and all, wearing short shorts or cute little skirts. And I don’t judge. In fact, I’m a little jealous. And then I have a realization. It just doesn’t matter. The only person that cares about the shape of my thighs is me. I’m the only one who is keeping track of how big or small, firm or not they are or have been. Those who ARE judging my thighs are the ones who have the insecurities. I should know. I am them.

They wonder if their own thighs look better. Or could there’s end up like mine and what kind of life would that be? They wonder who could love a woman with thighs like mine and thank God they have a husband, boyfriend, girlfriend, wife, children or friends who would never judge. Yes, thank God.

Oh the irony. All over a body part gifted to the soul that inhabits it.

At some point in my young adult life I learned it was rude to refuse a gift from anyone. Yet daily I, and let’s be honest, you, refuse the gift of life in one way or another. This body, and even these thighs, are here and this way to help me do whatever work I am here to do, to help move humanity forward. And that’s really why we’re all here. On some level you already know that. You know that worrying about the size of any body part is distraction from your real work. In fact the size of whatever body part you’re consumed with may be the doorway into your soul’s work.

If a 300 pound woman wearing a bikini pushes a beached dolphin back into the ocean, does the dolphin notice her rolls of fat? If a 98 pound woman lifts a car off a pinned child, do the parents comment on her scrawny stature? If a 175 pound woman with big thighs loves even a small portion of humanity back to health, will there be an editorial about her weight?

It’s all subjective. My thighs will never look like a speed skaters or a ballerinas. Nor will they ever look like Heidi Klum’s. They look like mine. And my mom’s and my grandma’s. They’ve looked like this for most of my adult life and they’re not going anywhere, so I’ll just have to embrace them. Be extra kind to them while slathering nourishing exotic lotions on them. Take them on more walks; they really like walks, especially hills. Dip deep in Warrior postures.

And dance, oh how they love to dance!