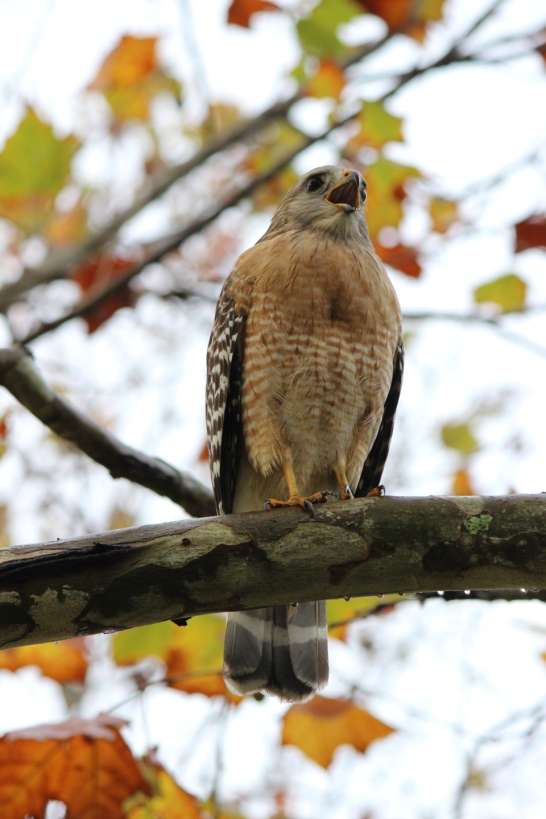 I thought I was going to the springs. The manatees are usually lolling about in large numbers in January and I love to capture their grace on film. But it was foggy, and I love fog, so I set out on foot through my neighborhood instead.

There’s an area of green space on my way to the duck pond that the deer sometimes frequent. It was too late for that, but the fog that hovered over the tiny creek that bends around a stand of palms looked mystical and poetic. I could imagine whole stories springing from that one little scene.

As I approached the duck pond it was close to deserted. A pair of mallards and a single snowy egret had it all to themselves. Over time a few more ducks, a loon and a red-billed black bird with the most enormous yellow feet showed up.

Pretty standard fare made a little more magical with the fog. I snapped a couple of photos then began to meander back.

“It would be so great to see a hawk” I thought. Just then, seriously, just then, I notice something swoop from one tree to another. It’s a hawk.

Hawks and I have a thing. They show up when I ask them to and even when I don’t. At times the appear because I need them to, but didn’t know I did. They will pose for me as long as I don’t impede their mealtime efforts.

Today I was gifted two. I think they were mother and child because they perched briefly together on the same branch and seldom do birds of prey do that unless there is a lesson in progress.

As I slowly tiptoed around underneath them to get the sun at my back, the mom flew a short distance away. She chose the top of the tennis court fence. The hawklet remained on the branch to pose for me.

The mother began to squawk, shortly after I watched the little one perk up and begin to respond. No one moved, including me, although I kept shooting away. There’s nothing quite so powerful as the call of a bird right in front of you.

Once they finished their conversation I attempted to get closer to mom. I was able to capture her in mid-sentence once or twice before the pair of mallards let out a huge quack right behind me sending mom away.

I turned my attention back to the hawks in time to see mom just clear the top of the branch where her young one had stayed perched, as if to say, “Come on, let’s go.” Together they flew off to continue the lesson with less human involvement.

As I walked home I could hear them across the street, hidden skillfully in a large stand of trees. I smiled in their direction, thanking them for sharing their time with me and delivering the message my soul was longing to hear.

According to Native American medicine, hawk is the Messenger. It is the big picture seer. I have always been a big picture person, preferring to work backwards from the grand vision to fill in the details.  When I am feeling churlish or agitated it is usually because I have lived too long with the minutia. I am mired in bits and pieces that often seem unrelated and messy. Hawk is a reminder to let the details go for a while and look up. The sky is the ultimate big picture, open and full of possibilities. And every now then I get lucky and a hawk soars through it.