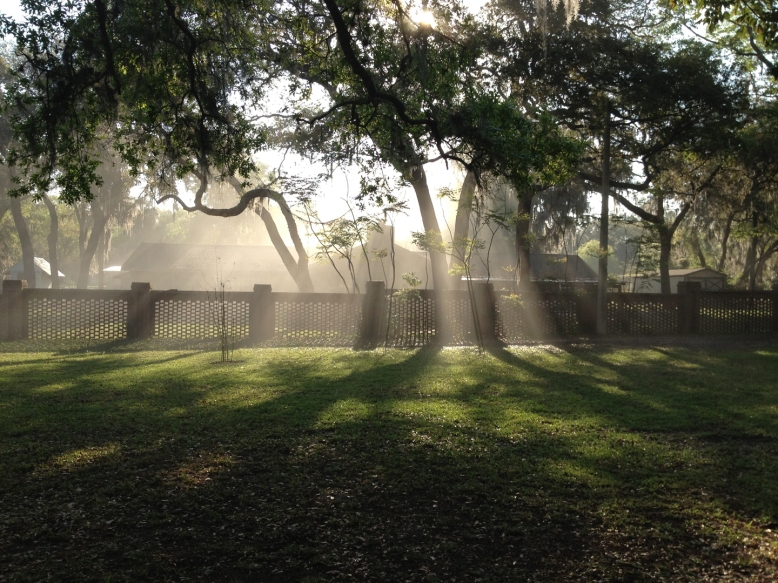 There is something so enchanting about the first morning light. As darkness relents to the rising sun the whole world is aglow for just a few moments. Light filters through trees, like a mystical omen of the magic to come. The world seems to warm. It’s only meant for a few. It’s too easy to miss, to sleep through.

During this time, in the summer months anyway – of which there are at least six here in middle Florida – the ground begins to make noise. Fallen leaves rustle, rocks are pushed out of the way by tiny reptilian feet. Most birds are still rubbing the sleep from their eyes, but a few start to chirp a little lazily.

There is one that seems to sit just outside my bedroom window whose sole purpose is to let me know the sun is about to come up. In an hour. He panics, I think.

Once the day begins to brighten and the sun makes its way to a visible point, the rest of the avian world begins to come alive. Two mourning doves coo sweet nothings on my fence. At times they roam around the floor of my tiny backyard looking for morsels. So at home, they wait until the very last minute to fly off in a huff when the hounds are released for their morning routines.

It is Saturday. The usual humming of car motors, the rise and fall of garage doors and the air brakes of the school bus are all absent. In their place is silence; the background on which all other sounds can be heard more clearly. A wind chime from two doors down announces a gentle breeze, a dog barks in the distance and beside me a cat works a catnip filled toy, causing the tiny bell on her collar to sing with excitement.

It’s too early and not enough hot yet for the summer bugs to begin singing. I don’t know what they are, some sort of cicada maybe, but I love their song. Or more probably, what it represents, and the fond memories of fleeting summers where there were three other seasons.

In an hour or so, the light will be different, more common. The sweet sounds against the quiet background will be lost to activity. The morning will be just a memory soon forgotten as the day picks up speed.

But later, much later – although it will be here before we know it – will be dusk. That golden hour when the sun, knowing it’s time is short, will flame out spectacularly providing the perfect light for a few fleeting moments before bidding adieu.

Yet there is still light, even after the sun slips below the horizon. As the creatures of the earth honor the rising sun each morning, it is the sun itself that celebrates the end of its workday with an explosion of colors that dance within the clouds.

I wonder what colors the sky will celebrate this evening.