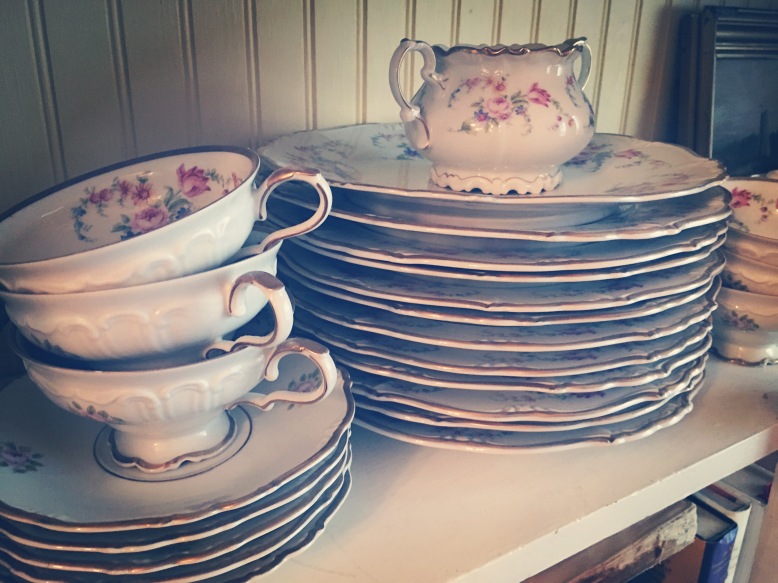 When I committed to the year-long purge in January, I truly just wanted to lighten up, get rid of stuff. I felt bogged down by things. I couldn’t find what I needed or remember where I put something because there was just too much. I knew I’d come up against obstacles like time and urgency, that I would resist and that organizing one space would require nearly every other space to become disorganized for a time.

I agreed with myself that I would trust the process and not abandon it. Turns out abandonment is part of the process, but only for a short time.

I find myself in that space of complete disarray. One room (three if you count the two bathrooms) is neat and clean without anything “extra” in it. The rest of the house is in organizational flux. Boxes have been pulled in from the garage to go through and purge in the living room. My room has been the repository of all things mom, along with the I’m-just-not-sure-where-to-put-this-so-it-will-go-here stuff. For now. The guest room bed is covered in old family photos waiting patiently to be organized, the kitchen is in constant use and various stages of purging and we will not be addressing the dining room here today. That is the work space of Larry and a complete health hazard.

Back to that tiny little sentence above: For now. I’m against it.

There are some instances when you have to do something just for the moment, but when it’s announced, “I’ll just put this here for now,” I know there is a deeper pathology at work. Even if I’m the one announcing it. It means, this thing that I’m placing here does not yet have a home, so I’m gonna lay it here while I think about that. Then forget about it.

We are working hard at finding homes for everything we’ve decided to keep. It is much easier for me to let go of things than it is Larry. He’s afflicted with that I-may-need-this-some-day gene. I prefer to pass things along I am no longer using, sometimes to people I know, often to a charity store. But sometimes I hold on too.

Something happens when you take possession of a thing. It becomes yours. And because it’s yours it now has value, but it’s just a thing. Even that 3 carat diamond ring is just a thing (not mine, don’t have one). The value is financial and emotional. The monetary value slides up and down depending on the emotional attachment.

Let’s take Grandma’s set of dishes that we use every Thanksgiving and Christmas, that she used on special occasions. They’re fine china we’ve been told, even says so on the bottom. They’re priceless, clearly. But in actuality, with the missing gravy boat and lid to the soup tureen the set is only worth about $50. At the most. It feels insulting. It’s the emotional grab. In truth if I were shopping for dishes I wouldn’t even consider these, they’re not my style. But when I use them they feel special.

This is the process. Each item is to be considered. This is where I am. I have culled the items that hold no sway – clothes, books I’ve read, unused greeting cards, Rubbermaid food containers and various other items, now I’m down to necessity and heritage.

Letting go of the things does not mean I am letting go of the memories or even tradition. Truly if I had 15 minutes to grab whatever was meaningful to me and get out of my home, after my pets it would be my computer, camera and artwork done by family members.

Is the myth of the memory more important than the freedom and space of letting it go? Is being bogged down by DVDs, old letters, family heirlooms more grounding and nurturing than wide open space in which to be creative and light?

I’m getting to it, the right balance for me. For now.