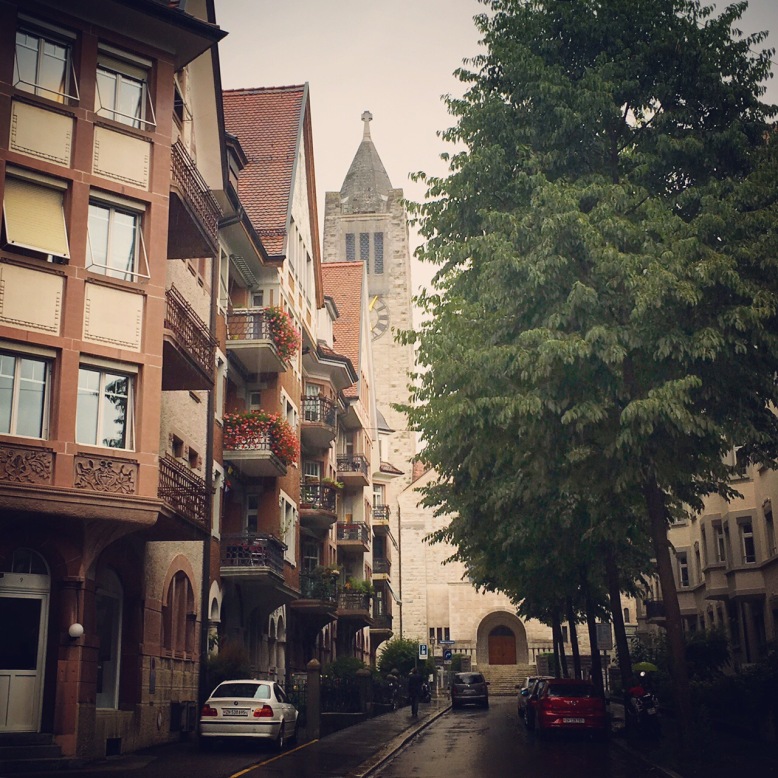 Today after a 12 hour journey or so I landed in the gray and rainy Swiss metropolis of Zurich.  During those long hours on a couple of flights I somehow relaxed enough for all the stress I had been so valiantly suppressing to  gush forward in the form of a perpetually running faucet of a nose. No matter.
Upon arriving at the airport I was to find my way to the Stadelhofen train station. Ok, was my response, I’ll figure it out. And I did. I have come to learn that the bonus side of my sometimes troublesome curiosity is awareness.

I dutifully followed signs to train/bahn, then found the info lady and finally the ticket man. I guessed at the right track 4, asked a woman who only spoke Portuguese a question she did not understand, therefor couldn’t answer about the train currently idling on the track and took my chances hopping through the open door, while swiping at my nose. I confirmed with a suspected heroin addict that this particular train went in the direction I intended and took a seat.

Four stops later I was spat out into the wet, cool air. My Airbnb host was there awaiting me and even took my bag. A carry-on only if I may boast. For two weeks. We walked a few blocks, took an elevator better suited for one small child with a chihuahua to the fourth floor and entered the apartment.

Spacious, comfortable, on a park and a fraction of even the least expensive hostel. Switzerland is pricey. He showed me around then left.

I arranged a few things, poked around the kitchen then fell into bed with the windows open and the rain pounding away outside. An hour later I was refreshed enough to cross the street to the grocery store. I wanted to explore more but the rain and this annoying sieve of a nose caused me to pump the brakes. For an hour or so.

As I was getting ready to leave again, I heard the familiar sound of pedals striking strings. Piano music was seeping through the walls giving me that delicious feeling of being part of something. Life was happening here. Cities have always been my comfort zone, I like the idea of knowing there are stories happening all around me simultaneously and maybe even intertwined. We are all connected after all.

As I made my way down the wide concrete stairs that belonged more to a 1930’s office building than a 5 story apartment building, I noticed other bits of stories. The occupant directly below me had two umbrellas leaning again the wall next to their door, a little further down one occupant had placed a big lace heart on their door and finally at the bottom, a chiropractic office.

Outside more than a dozen bikes sat in a row unlocked and unconcerned. The park was glistening bright green and a mother stood by while her child rode a hobby horse even in the rain.

I wandered to Starbucks. I know, but it’s a little bit of grounding that feels like a permission slip to explore freely. After that I took any side street that interested me with the intention of making my way to the water. I watched the good citizens of Zurich for traffic and street crossing clues, wished I had an umbrella and took note of stores and restaurants to explore later.

The waterfront was beautiful and mystical shrouded in low hanging clouds. Solitary joggers and residents on bikes passed me by on the walkway arcaded with these magical trees. Occasionally a pair of friends would stroll by peeking outfrom under  their umbrellas to be sure the other understood the point they were trying to make.

There was a bridge in the near distance that was pulling me but I had to resist. I had to get into dry clothes and blow my nose. I had to check my powers of observation and recall to see if I could find my way back without soaking my phone to check Google maps. I did. No problem. Even managed to duck into a different grocery store for a medicinal bottle of wine.

Day 1 in the books. Tomorrow promises the same weather but I think I may find my way to Lake Lucerne. Back to the train platform to the train station to navigate farther south then hoof it around the sweet lake town. But we’ll see.