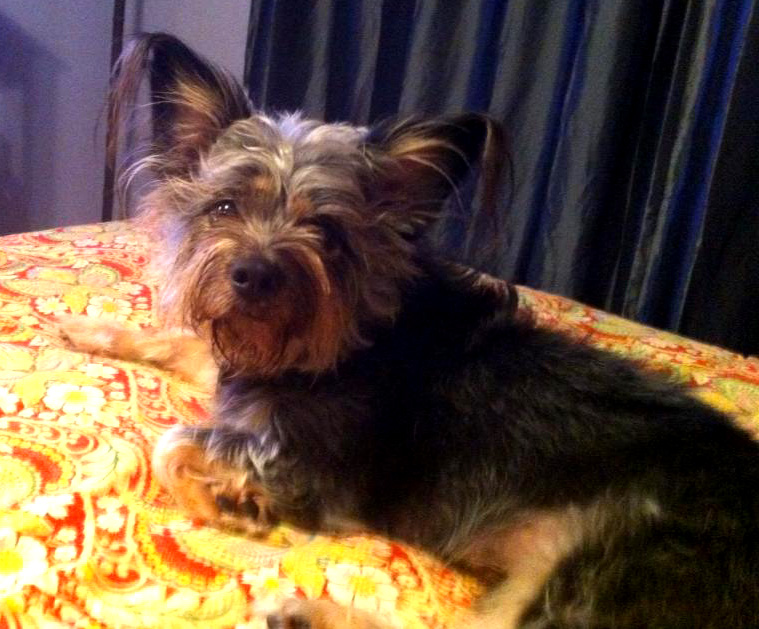 Today I went with a friend to the vet to put her dog to sleep. He was 8. Beginning this past Saturday he started to whimper and by Sunday he had lost the use of his back legs. A pinched nerve or inflammation was the suspicion. After four days of vet visits and myriad treatments a specialist declared Scrappy, that was his name, had a nearly severed spinal column and no amount of surgery or drugs could help him.  A degenerative disorder. The extremely difficult decision was made to let him go.

Where’s the enchantment in that?

There was nowhere to be except completely present. Feel the feelings. Sadness for my friend, loss for me – I’d known him since she got him, watched him when she was away, yelled at him for jumping on people and barking at the neighbors. I cried more than she did. She was exhausted, cried out and at peace with her decision. He seemed at peace with it too.

The sparkle was gone from his eyes and he looked tired and confused. We stayed with him as he slipped away, kissing the top of his head whispering sweet nothings that he could take with him on his trip. His buddy left earlier this year and he would be waiting to welcome him.

The enchantment is in the memories of a goofy dog that didn’t know when he rushed in to love you it was like hurling a bowling ball through space. If you weren’t prepared you’d be under him on the floor. It’s remembering how when you said his name he’d close his mouth and stop wagging his tale to look at you as if he could only do one or the other.

When he was let outside he shimmied along the screen enclosure and the fence where there was rock or bark on the ground. He sped across the grass as if it was on fire to get from one patch of rock to the next. Grass wasn’t his thing. He tossed his toys in the air and caught them himself when the humans tired of the game. He insisted on sitting on laps.

The enchantment is in bringing those memories forth to the present moment, re-experiencing them, feeling the kind of open heart that can only come from loving a dog – even if it isn’t yours.

The enchantment is in knowing there are so many other dogs out there that deserve the same shot at a loving, caring home.

The enchantment is in the love you felt, and will continue to feel, for the dog that wanted nothing but to give love. It’s in taking that love that’s left after he’s gone and sharing it with every other living creature.

For 8 years that enchantment was Scrappy.