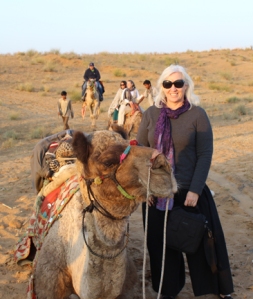 Fear is an interesting companion – at times helpful, but so often very limiting.

I encounter people every day that are in fear about something on some level, maybe we all are. I think I have mostly let go of Worry which seems to be Fear’s insidious cousin, always lurking in the shadows pushing Fear out in front of me, trying to scare me into living small. Without Worry, Fear only shows up if danger is imminent and I can make a reasonable choice about whether or not to proceed.

In recent years I have agreed to do things before Worry and Fear knew what I was doing. They’d show up, all casual a week or a few days before a flight to India or as I was placing my foot into the stirrup of a camel or snorkeling beyond the safety of a cove. They’d nod in that cool, almost sinister way, chin up, just once and say, “Are you sure you wanna be doing that?” They would parade all sorts of scenarios before me: terrorists slowly walking past me on the plane only to turn around and sit right next to me; wandering into the desert on a rogue camel with no water or sunscreen; being eaten by a shark or sucked into a freak ocean floor hole. I mean, come on. At least they were creative.

Each time I would look them straight in the eye and say, “I think so.” Doubt had been cast. I felt myself waver just the tiniest bit and then like a superhero in tights and a cape Captain Confidence would swoop in, hands on hips and say, “Of course you do! Life is about experiences.” Then he’d kick Fear and Worry to the curb where they’d sit like naughty children.

I know they’ll be back. All of them. Already I am planning a road trip up the east coast, a week in Cuba and possibly two weeks in Italy. And every day I make the choice to leave my house, drive my car, walk on sidewalks and cross streets throwing Caution to the wind, who will surely run to let Fear and Worry know they’d better be on their toes.

12 thoughts on “Fear, the Final Frontier”