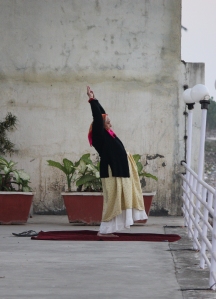 There is nothing quite like yoga to tell you what’s going on in your body. Even the gentlest class can reveal secret tight places and hidden tension.

Today I did a level I/II hatha class, it’s one of my favorites. The postures are familiar but not always easy and the pace is just right for my attention span.

However doing side plank the day after working out the back and arms – or back and bi’s as us gym rats call it – may not be so wise.  My arms felt like paint inside the mixer-upper thing at Home Depot. I found a muscle I didn’t know existed and still can’t seem to locate on any diagram. I believe it is an unchartered area of my tricep. It’s unhappy with its newly awakened state.

Although I own a yoga studio, have taught for over five years and have practiced longer than that, yoga and I still have some stuff to work out. I am in love with the philosophy and could talk spirituality all day, but the asana portion, the postures, they challenge me on so many levels.

There are eight limbs in yoga, only one of them, the third one, is about postures. The rest include a code of conduct in how to be in the world, breathwork, and a few on various forms of meditation. They are all necessary. Even the postures.

It’s not that they’re too difficult, although there are many I cannot do, it’s the pace, the holding. I like to move. I love to dance. I like to walk and swim and ride bikes. Standing still with my arms extended and one knee deeply bent for a few breaths has my mind wandering, chattering, disagreeing with the whole notion that this is necessary.

And it’s that reason alone, that it is. I have to become at peace with where I am. Mentally. Physically. Emotionally. Yoga does that. I can curse the teacher for making me hold a posture, making up stories about how it’s wrong, this particular posture should never be held this long, someone’s going to hurt themselves, and what’s with the breathing? Stop reminding me to breathe.

And then we’re done.

I am standing still, lost in sensation in my body, swimming blissfully in the energy just released from holding that godforsaken posture.

I am open, my mind is quiet (temporarily, but still) and I am at ease. Yoga is stilling the fluctuations of the mind. It is quieting the mental chatter by giving the body a little tension – in the best possible way – and moving the thoughts out of the head into the muscles, then out all together.

Even though I know this, even though I will be back the next day or two, or on my mat at home, I will suffer the same process.

And in the end I will be grateful for it. Again and again.

[Photo credit: Allison L. Andersen. Taken in Daman, India. She’s facing the Arabian Sea as she does her variation of saluting the sun.]